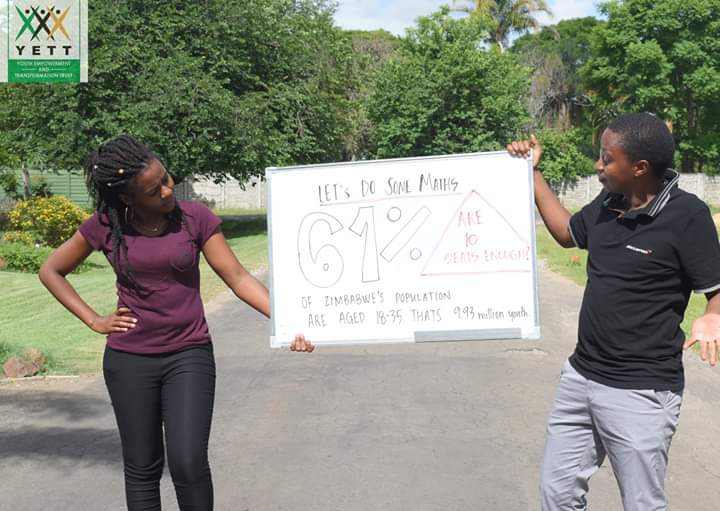 On the 31st of December 2019 and again on the  17th of January 2020, the government of Zimbabwe , through the government Gazette, published the Constitution of Zimbabwe Amendment Number 2 Bill. Should it be passed by parliament, the bill will introduce several changes to the Constitution of Zimbabwe with some of them ranging from being minor to being very important. One of the proposed amendments seeks to reserve 10 proportional seats in the national assembly for youth and to extend the women’s proportional representation quota seats for a further 5 years. This paper will explore these 2 aspects of Amendment Number 2 and their broader implications on youth participation in governance processes in Zimbabwe.

From the onset, it must be appreciated that constitutional awareness amongst young people is very low.Accoding to a Youth Situational Analysis (YSA) research study done by the Youth Empowerment and Transformation Trust (YETT in 2019 ,less than one in five (17.5%) of young people knew about the 2013 Constitution . Furthermore, the majority of those who knew about this very important document  derived this information from personal reading of the constitution ,followed by information from friends, radio, newspapers  and television. Such limited constitutional awareness amongst the youth is very worrying given the fact that the constitution is the supreme law of the land from which all the other laws which govern different aspects of the day to day realities of all Zimbabweans (including young people), are derived from. Some of these aspects include establishing a framework of laws which govern how public office holders are elected and or appointed  into office. The very same public office holders are responsible for overseeing the implementation of policies which address key youth empowerment priority areas such as youth work and employment; citizenship and rights; health; food security and resilience; information and communication; migration and education. In this regard, low levels of constitutional awareness amongst the youth can only be self-defeating.

Clause 11 of the Amendment seeks to extend the provision for the party-list proportional representation women members of the National Assembly by another two extra parliaments and makes provisions for the party list representation of youths in the National Assembly. In simpler terms ,the amendments are proposing to create 10 seats for youth (people aged from 21-35 years of age), in parliament. They further imply that the women’s quota which was supposed to end in 2023 will now be extended to lapse in 2033.Critical to note is the fact that these 2 provisions present a single-entry point for women and youth, into parliament. This would be through political party nomination and recommendations for election under the party list system. A critical question to be asked is to what extent can the political party system in our country be trusted to deliver meaningful change in youth and women’s  political participation dynamics in Zimbabwe? In 1980 the cabinet appointed by Prime Minister Robert Mugabe had the youngest MP who was Joyce Mujuru aged 22 years old then, majority were in their 30s and 40s and  only one person just above 60.Fast forward to  June 2018, out of 210 members of parliament, only 5 were aged 35 and below. The current cabinet  does not even have a single minister  aged 35 and below. The only exception being Hon Kirsty Coventry ,the current Minister of Youth Sports Arts and Recreation who was 35 at the time of her appointment.

In my opinion, a  quota system in itself is not a bad thing. It signifies a realisation that for a long-time women and youth have faced structural barriers which have prevented their meaningful participation in politics and governance processes of the country. It is the manner in which the quota system is structured which needs to be interrogated. Key issues to be considered include whether women are electing other women through the women’s quota or it is men who are electing women; will extending the women’s quota by another 2 terms and increasing the number of youths in parliament by 10 have any meaningful impact on youth participation on governance and politics without addressing the real issues behind limited presence of women and youth in politics? Beyond focusing on increasing  youth and women’s representation in parliament, other options include putting in place a women and youth quota at local government level, municipalities and rural district councils. These measures would ensure that more than 10 youth are occupying political office in spaces where decisions made directly affect the day to day realities of the ordinary youth at local community level.

Our current constitution is a product of widespread public consultation which culminated in the 2013 constitutional referendum. Already in a period of 7 years we have made one amendment to the constitution through constitution amendment number 1 which changed the procedure for the appointment of the Chief Justice. If it sails through, Amendment Number 2 Bill will be the second amendment ,all within a short 7-year period. Whilst constitutional amendments are procedurally legal and can be rightfully used to correct defects in the original document, one can ask whether there are other avenues for promoting youth and women’s political participation without amending the constitution. This could be achieved through amending key pieces of legislature such as the electoral act, to provide for legal candidate quotas. Under this option, it would be mandatory for political parties to incorporate a minimum number of young people on their party candidates list. In conclusion, it must be noted that legislative participation does not necessarily and consequently lead to effective parliamentary representation. The capacity of the 10 youths  nominated into parliament  through this quota system will also be  critical contributor to how well they will articulate and represent the entire youth constituency  should this proposed amendment sail through. Starting with raising youth constitutional literacy, sober reflections on the advantages and disadvantages of the youth and  women’s quotas as proposed in Amendment (2) Bill are required before  any positions on this very important matter are adopted.