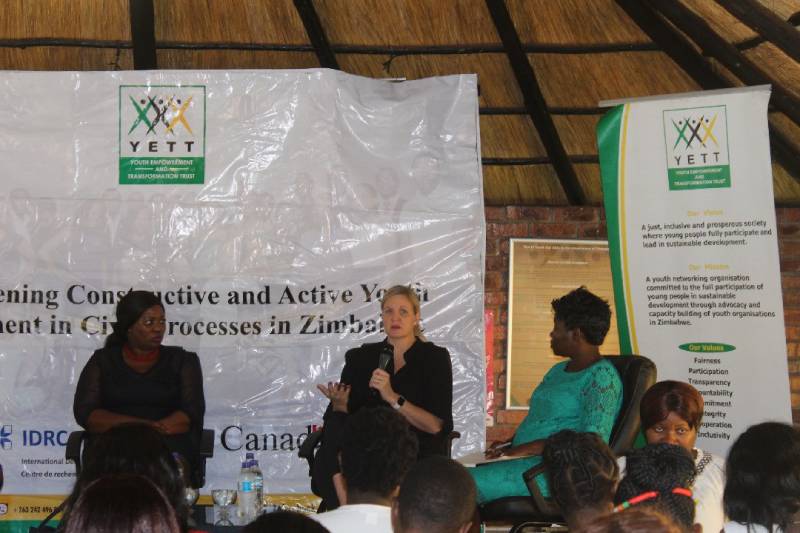 The National Peace and Reconciliation Commission (NPRC) has been moving around the country setting up Peace Committees. The NPRC was stablished under Sections 251 to 253 of the Constitution of Zimbabwe Amendment (No.20) Act 2013. Section 252 of the Constitution of Zimbabwe Amendment (No.20) Act 2013 states that the NPRC’s functions are to ensure post – conflict justice, healing and reconciliation. In January 2018, President of Zimbabwe Emmerson Mnangagwa signed the National Peace and Reconciliation Commission Bill into law. The enactment of the law operationalized the Commission that was appointed in 2016.The establishment of the peace committees is in line with the Commission’s strategic priority to enhance the resolution of the country’s conflicted past and healing process.
The Youth Empowerment and Transformation Trust (YETT) believes that young people are critical stakeholders if genuine peace and reconciliation is to be achieved, therefore they have to be included in the Peace Committees that are being set county-wide. Youths are central to the solution of the multifaceted crises that have engulfed Zimbabwe’s economics, politics and society. Young people in Zimbabwe very often find themselves at the centre of conflicts usually as the pawns of power-hungry manipulators. The success of peace including conflict prevention, management and resolution depends greatly on the inclusion of marginalized groups, such as women and youth. Effective youth inclusion requires the engagement of young people at all levels and sectors of society, including those who are marginalized due to their gender, ethnicity and educational background. Young people are key players in contributing to the success of building the peaceful and inclusive communities necessary for sustainable development.
The setting up of the peace committees commenced on 28 May 2019 in Harare. According to Philemon Shereni, the NPRC Spokesperson, the Commission will begin conducting hearings once the peace committees are in place. At these hearings, people will be expected to share their experiences on Gukurahundi and other political disturbances, and also on how the country can heal and move forward. “The peace committees are a platform within the Commission to deal with issues of peace – building in communities. What they will do is that they will use local knowledge and local resources in dealing with conflicts and peace – building initiatives in their localities.” NPRC Commissioner Patience Chiradza said. She went on to say that “the provincial peace committees consist of various stakeholders representing government, civic society, Church, business, academia, political parties, youth, people with disabilities and war veterans.”
The Zimbabwean context of conflict is rooted in disputes over national power, economic hardships, unstable political landscape and pre – colonial disputes which have not been resolved. However, with the establishment of Provincial Peace Committees, it becomes clear on the need to have young people on the epicenter of peace and security as key actors and contributors to peace and national healing. Thus, the combination of socio-economic deprivations and socio-political exclusion informs the nexus of youth despondency, and peace and security challenges in the country.
On December 9, 2015, the United Nations Security Council (UNSC) approved Resolution 2250, which is the first resolution that specifically addresses the role of young people on matters of peace and security. The resolution is a historic milestone for its recognition of the role that young people can play in the prevention of conflict, the promotion and consolidation of peace. This resolution captures the legacy and contributions that have been made by some provisions such as the Guiding Principles on Young People’s Participation in Peacebuilding, the Amman Declaration on Youth, Peace and Security. The UN Resolution 2250 is affirming that young people are instruments of change, and if well supported, they have great potential to contribute in peace building. The fact that young people endure suffering in politically motivated conflicts since 1980 demands their appropriate engagement in peace processes.
YETT believes that it is important that the government invest in the capacities, agency and leadership of young people so that they may fully reach their potential to contribute to peace and national healing. Thus, providing an enabling environment for young people to promote a culture of peace and prevent counter violent tendencies. The political processes underway in the country under the “Second Republic”, the social and economic environment is expected to be geared towards helping young people contribute meaningfully on peace and national healing. The mere recognition of the role of young people as key actors in peace and national healing is not enough, but the inclusion of young people from the stages of conceptualization, design and implementation process of the peace committees will go a long way in achieving real peace and social cohesion.