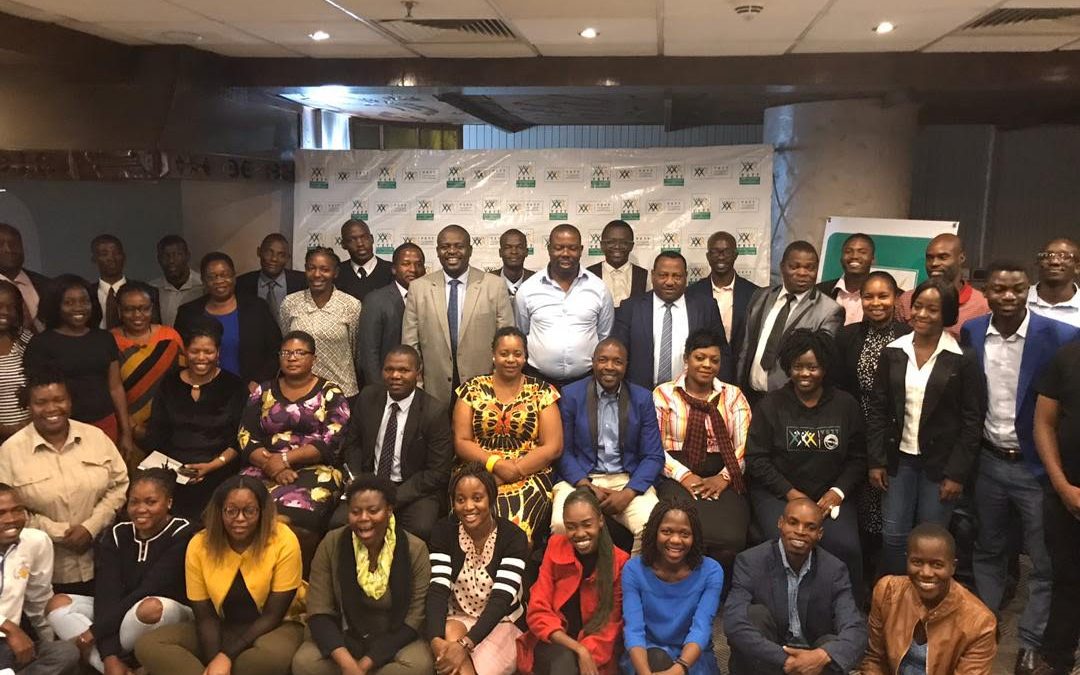 Zimbabwe’s development agenda as outlined in both the Transitional Stabilisation Programme and Vision 2030 cannot succeed without the open engagement of young people. The Zimbabwean Constitution defines youth as persons aged between 15 and 35 years old.

Young people in Zimbabwe account for a significant share of the population that has felt the effects and suffered the burden of economic and political conflicts. According to the Inter-

Censal Demographic Survey 2017, persons under 34 years constitute 74,4% of the population in Zimbabwe. Young people are key stakeholders in development and implementation of solutions

for the problems that the country is facing.

active part in various initiatives in their communities.

However, repression by institutions and structures that are supposed to give young people voice has often led segments of young people to opt to be bystanders because using their voice was seen as a risk for verbal or physical retaliation.

In Zimbabwe, this has resulted in leaders getting away with things they should not be allowed to get away with, including public office corruption.

Alcinda Honwana (2012) states in the book The Time of Youth:Work, Social Change and Politics in Africa that youth are a critical indicator of the state of a nation, of its politics,

economy and social and cultural life.

It is, therefore, crucial that all state and non-state actors dedicate significant resources towards understanding young people so that national development initiatives are enhanced.

In recognition of this fact, it is important for young people to be engaged citizens. The Transitional Stabilisationn Programme outlines the need to fight corruption and it is important

for young people to take an active role in this.

Whistleblowing at various levels of society is an activity young people can peacefully take part in. Young people also need to develop a culture of reading and following up on available documentation that exposes rot in various institutions.

The Auditor General’s findings provide a platform for engagement and monitoring by young people from various walks of life. Boycotting of goods and services that are sold by individuals and institutions that have shown ill discipline in terms of available policy frameworks is a potentially effective way of getting such groups to listen.

At national level, Zimbabwe has in its Constitution the Traditional Leaders Act and the Rural District Councils Act outlining provisions for youth participation. Section 20 (1b) of

the Constitution puts that the “State shall ensure youths have an opportunity to associate and be represented in political, social and economic life”.

The Traditional Leaders Act provides for the establishment of Village Development Committees (VIDCOs), which are both consultative and advisory bodies which can then advise the Village Assembly as well.

Young people need to be the change they want to see

A proverb from West Africa says: “if the child robs when he begins to walk, he will plunder a sheepfold when he grows older.” As soon as young people are capable of discerning what is

right and what is wrong, there is need for them to learn to act the way they would expect leaders to do.

There is need for honesty among young people in everyday activities that have far-reaching consequences, including securing driver’s licences, passports and using the honest route to secure opportunities.

If young people do not have the courage to be honest and stand out from the crowd, then there is risk of perpetuating corruption in society. Increased corruption compromises the ability of the country to meaningfully contribute to the regional and global agenda as outlined in Agenda 2063 and the Sustainable Development Goals.

Young people need to be able to deal with violence, discrimination and hate speech based on gender or political affiliation and be able to promote the values enshrined in the

The fight of eradicating poverty and promoting social cohesion cannot be achieved by one particular age group or constituency, but there is need for young people to step

up and ensure their voice is heard in all important discussions concerning national development.

In ensuring that youth play a central role in the sustainable development in the country, Youth Empowerment and Transformation Trust (YETT) provides capacity development and technical

support to youth and youth-serving organisations.

YETT also provides research and analysis to inform advocacy initiatives by youth-led organisations across Zimbabwe. We call upon other stakeholders to support and engage young people so that Zimbabwe realises the potential of a demographic dividend.